It is with great sadness that we share the news that Prof Ghulam Azam’s younger brother, Prof Ghulam Muazzam, passed away today 22nd Jan at 3.45pm in Dhaka at the age of 90 – Innalillahi wa Inna Ilaihi Rajiun. 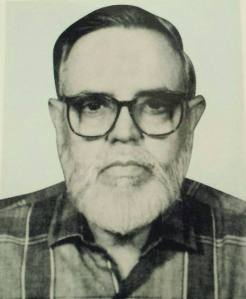 Prof Muazzam was one of the leading medical scientists of Bangladesh and a top pathologist. A gold medalist from Koltkata Medical College, he taught at Dhaka Medical College, Rajshahi Medical College and served as Principal of Sylhet Medical College and later Rangpur Medical College. He was the founder of Ibn Sina Laboratory where he also fulfilled the responsibility of founding chairman. He served as a fellow in medicine in London at the Nuffield Foundation UK, as a Professor at Al-Fatah University in Libya and as Professor of Pathology at the University of Ghana. While holding important positions both home and abroad he never compromised his principles as a true servant of Allah. Among his works, he published research into the medical benefits of the Islamic fast in Ramadan and on the Qur’an and science.

He was extremely close to Prof Ghulam Azam and had always supported him in his efforts for establishing Islam. He was also extremely loving to Prof Azam’s children and grandchildren. He had spent the last 10 years in illness, suffering from Alzheimer’s disease. We request all to keep him and his family in your prayers. May Allah forgive all his sins and grant him the highest place in Jannah. May Allah grant the family patience to bear this loss. Prof Ghulam Muazzam is survived by his children, grandchildren and great-grandchildren.

His janaza prayer will be held after Jumuah on 23/1/15 at Moghbazar Qazi Office Lane mosque, following which he will be buried at the family graveyard next to the mosque, joining his parents and his brothers already laid to rest there.

Seated with two of his brothers, Dr Ghulam Muazzam (far left) and Dr Mahdi Uzzaman (Centre), and his niece.